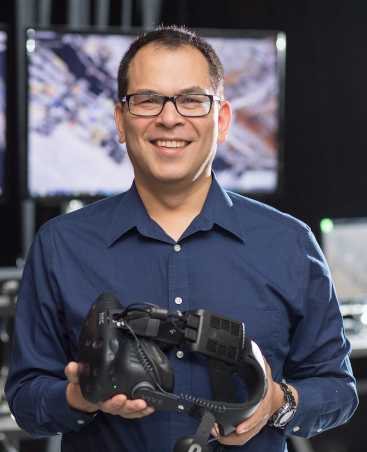 Dr. David Krum is an Assistant Professor of Computer Science at the California State University, Los Angeles. His research interests include human-computer interaction, virtual/augmented reality, and 3D interaction. He began his research into virtual reality technologies in 1998.

Previously, he was the Associate Director for Mixed Reality Technology at the ICT Mixed Reality Lab, which developed new techniques and technologies for presenting immersive experiences. At ICT, he contributed to development of low cost virtual reality displays, such as the smartphone based FOV2GO, and REFLCT, a head mounted projector display for augmented reality.

David also worked as a research scientist for the Bosch Research and Technology Center, investigating automotive user interfaces and 3D visualizations for building security systems. He was a software engineer at Motorola, contributing to data communications products like the BitSURFR ISDN modem, selected as a Best Product of 1996 by PC Magazine.

David earned a BS in Engineering and Applied Science from the California Institute of Technology and an MS in Computer Science from University of Alabama in Huntsville. His PhD, from the Georgia Institute of Technology, focused on how wearable computers, combined with 3D visualizations could help spatial cognition, that is, help individuals more quickly learn the structure of their surrounding environment. His dissertation involved an eyeglass mounted wearable computer display, a decade before the introduction of Google Glass.